KENOSHA, Wis. — With more than 40 years in the sanitary food equipment industry, Deville Technologies has recently partnered with another leading equipment manufacturer to offer a hygienic vibratory feed conveyor for packaging in the cheese and dairy industry.

While Deville has been offering a full suite of cheese slicing and cutting equipment for decades, it often worked with a third party to supply packaging equipment as part of its offerings, Penta says.

“We felt that there weren’t any offerings on the market that quite met our hygienic standards,” he says. “In some instances, what was out there also was lacking quality from a mechanical standpoint, or the hygiene wasn’t what we wanted to offer the market.”

Deville sought to find a partner in the marketplace that specialized in vibratory conveying equipment but that also could incorporate Deville’s standards for sanitary design.

“It just so happens that PFI came on the table and we started talking to them about their vibratory conveyor. They had one, but it wasn’t at the level we wanted for the dairy market,” Penta says, noting the dairy industry’s sanitary standards under USDA’s Dairy Division are some of the most stringent in the marketplace.

“We came up with a design partnership where PFI would do the mechanical design, and we would do the hygienic design,” he adds.
While PFI has worked with food industry manufacturers, the partnership was its first targeted foray into dairy, says Mike Barber, corporate accounts manager, PFI.

“We’re working with Deville to penetrate the dairy market with this offering,” he says. “We’ve had this technology for awhile, but the machine looks different because the sanitary requirements are more stringent in dairy than in markets we typically serve — although that is changing daily as regulations ramp up across industries. Sanitary design is one of our key focuses.”

The end result, Penta says, is one of the most hygienic vibratory feed conveyors on the market.

The hygienic vibratory feed conveyor features stainless steel construction and a solid round bar base frame with no hollow sections, Penta says. The conveyor can feed any kind of reduced size cheese — such as shreds or chunks — into a vertical form/fill/seal machine.

Not only is the design extremely sanitary — with no 90-degree angles and a high ratio base frame to pan design for reduced transmitted vibration — it also offers superior performance with a 360-degree radius, Penta says.

“It’s important for packaging equipment to perform at an optimal rate by having product disbursement on a 360-degree radius as opposed to a perpendicular line,” he says.

The feed conveyor can be mounted to an existing structure, with an optional sanitary base frame, or it can be suspended, he adds.

The open architecture also allows for complete access for sanitation and swabbing, and it is assembled with certified hygienic hexagon bolts and nuts.

“We are very familiar with our technology, but we needed to package it in a way that would be acceptable in the dairy market. Ken coached us on that, ensuring that we were taking advantage of best practices and constructing an appropriate design for the market,” Casey says.

The two companies found that working together was virtually seamless as they shared similar company values.

“It’s been a great partnership with them. They’re an extremely motivated company, very professional, with similar core values to us,” Penta says. “We are very impressed with the dedication on both sides with the partnership.

“They were very open to our recommendations, and likewise we were open to theirs,” he adds. “This is the beginning of a great relationship.”

“It was so much fun to work on something and access a market we were limited in before,” he says. “It was a great experience from start to finish, and we are so proud that we were able to present a product that is really impressive with our first joint project.”

“It allows for more synergies between the packaging and processing equipment, featuring optimum efficiency,” he says.

He notes there are a lot of types of vibratory feed conveyors out there on the market, including electromagnetic systems.

“In our initial reaching out to subcontractors, we had experience with both types, but not knowing much about them, we’d reach out to a third party and they’d give us their version of what they thought was good for dairy. We got to experience the pros and cons with all of them,” he says.

“When we finally paired up with PFI on this hygienic vibratory feed conveyor, we took our extensive expertise and put it into one piece of equipment,” he adds. “We decided the electromagnetic feed conveyor was the way to move forward. There are no mechanical parts, no motors or rotating shafts or things that can wear out or break. It uses electricity to create a magnetic field to create displacement.”

He adds that it runs quietly and can start and stop on demand, leading to production efficiencies.

“What it really does is optimize the flow of product from process to packaging,” Penta says. “Everything is determined by the packaging equipment, in terms of the speed at which you’re processing. You need your packaging line to be able to keep up with the processing line. Your line is only as strong as your weakest link — so you want the right components throughout the entire production line. We feel we’ve put a product on the market that will really work in synergy with the scales that are out there for packaging equipment.” 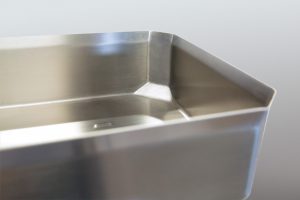 SANITARY DESIGN — Every detail of the new hygienic vibratory feed conveyor was deliberately designed with USDA compliance in mind, such as eliminating the often overlooked three-sided 90-degree corner pocket, a common harborage point for debris and bacteria. 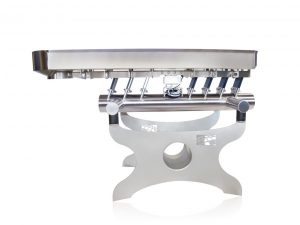